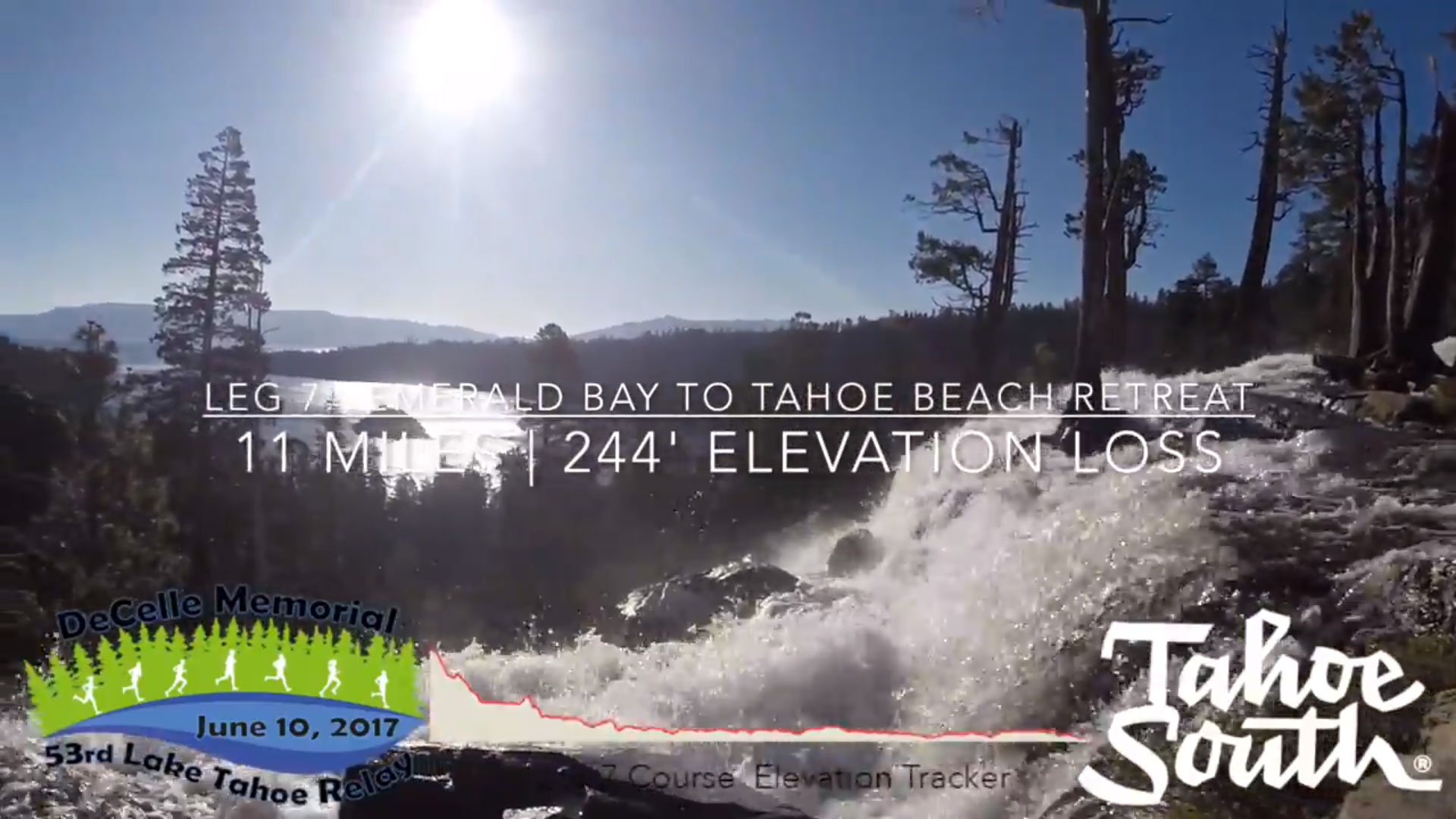 Beginning from Emerald Bay, you and your entire team will feel like you’re on top of the world! On the left is the bay and on the right is Cascade Lake as the course continues its descent onto one of the most famous roads around Lake Tahoe. Once past the views, you’ll have pure downhill running, filled with a few switchbacks and emerging onto a very flat section. Next up, Camp Richardson!

The earliest records of ownership of the land around the present Camp Richardson Resort and Marina are from 1875 when M.C. Gardner acquired a timber holding of several thousand acres from the U.S. Government and built a sawmill and railroad line. He paid 25 cents an acre for the land, plus $1 per acre payable over 20 years. His railroad followed the present Jameson Beach Roadway. He sold over 12,000,000 board feet of logs each year for 12 years from this location.

Lucky turns the land from logging to stately…

By the late 1880’s, he had logged over much of the area. E.J. “Lucky” Baldwin then bought out his holdings and began to develop the lakefront portion. He built a stately summer home, and sold parcels to other families (Pope, Tevis, Comstock, and Lawrence) who built the lovely homes which are now on the adjoining properties. The Tallac Hotel was built to standards of the great European Summer resorts and until the 1920’s was a prime attraction of the Lake Tahoe Area.

In 1904 Joseph Parmeter and his niece Nellie Copeland, bought the 100×400 ft. parcel that is now the Camp Richardson Marina and built tent cabins and summerhouses in Copeland’s Grove. Nellie and her husband, the hard drinking, hard-swearing J.C., also built a saloon over the water and a dance pavilion for their summer resort and catered to “Folks weary of the city”. Such was J.C.’s devotion to the saloon that the next owner of the Grove was their bartender Ziegler, and it became “Zeigler’s Grove” until the late 1930’s.

In 1921 Captain Alonzo Richardson leased a large parcel from the Comstock and Lawrence families and set up a stage service from Placerville to South Lake Tahoe. For many years his oversized, low-slung Pierce Arrow touring cars were a familiar sight in the area. In 1924, he bought the property and began to build cabins and a lakefront pavilion. By 1926 he added the hotel, dining room, gas station and other buildings of the present day resort. In 1927, the Tallac Hotel was torn down and Al Richardson moved the Tallac Post Office to Camp Richardson. He built the “long wharf” which is now the Resort pier, and operated a launch and other water services for guests. The Steamer Tahoe and mail boats called in at the wharf daily.

As your transported back into modern times you’ll get to the “Y” intersection of Highway 50 and 89 where you’ll make a left onto Highway 50. In the final stretch, be aware that there will be traffic and you’ll be running against it. You must pay attention to all traffic lights and stop signs. The merging traffic onto Highway 50 from a cross street will not expect runners, so it’s your responsibility to stop. In the last 1.5 miles, there is a bike trail that parallels the highway that your more than welcome to run on instead of the road.

Finishing where you started

Exhausted but feeling accomplished, you’ll arrive at the Lakeview Commons and cross the finish line! Enjoy a cold brew and talk to other runners about their journey around the lake. As the old adage goes, “It’s not the destination but the journey that matters.” Congratulations will be in order at this point for everyone!