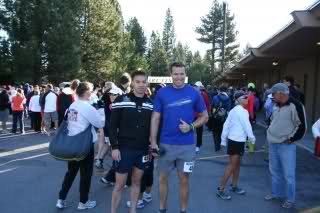 My friend Matt and I have been enjoying the Tahoe Relays since 2008. In 2009, we took at 5-person team in which Matt and I ran two legs each. We felt pretty good after that experience, therefore when 2010 came around we decided that we needed a new adventure. There wasn’t much to discuss we both knew what we wanted to do, so we signed up as Matt- Cal Gone Wild!” A two-man team ready to take on The Tahoe Relays. We started off really well, up in the front, though that may not have been the best idea. Matt was running the odd legs and I was running the even. Matt pushed a good pace that first leg and passed off to me where I continued that pace. Both of us were feeling pretty good, until we both started our third leg. The wear and tear of already 20 miles of climbing and pounding started to drain the legs, as the paced slow there was the dreadful thought of not making the 13-hour cutoff time. We had to stop more times than desired, but the constant cheering of our crew and more so the overall Relay Participants really kept us going. Time and time again we would hear, “haven’t you already ran?” It always made us laugh and further more encourage us to keep going. We had more GU, Gatorade, and other much needed fuel to get us to the finish. It was great feeling for me when I finished my final leg and was able to focus on supporting Matt in his last leg. It was sheer determination for both of us to make it to the finish line and when all was said in done, we finished just under 12 hours and got 91st out of 119 teams. It was a day we will never forget and we are already looking forward to Tahoe Relays 2011. Thanks for putting on such an incredible race that attracts a lot of GREAT people.

The year was 1977 when a group of young, fast distance runners decided to start a new running club called the Lake Merritt Joggers & Striders. The founding group included John & Claudia Notch (the first presidents), Bill Jenney, Mike Wheeler, and Dan Williams. One of their first activities was the formation of a relay team for the DeCelle Memorial Tahoe Relay. The club needed another “open” male to fill out the team and I was quickly recruited to make the journey to “the other Lake”. Little did I know at the time, but that first relay was the start of an annual pilgrimage for me and my Club that has now reached 31 trips. For each of the 31 races since that first relay in 1977, our Club has sent at least one team to run around Lake Tahoe. The event has become an annual tradition for us with many fond memories and great experiences. I myself have returned 28 times to race plus one time to captain a team without racing (I was injured). The only other races I missed were in 1992 when I decided to run the Armenian Summer Games which took place on the same weekend in Fresno, and in 1996 when I was hampered with an iliotibial band injury.

So much has changed since those early years – thankfully for the better. In our first years, the race logistics were sparse. There were no frills of any kind — no timekeepers at the handoff points, no toilets, and no notification of local authorities. Bob DeCelle would fire his gun at the start and then wait in his beach chair for all the teams to circle the Lake. Knowing Bob, he probably went fishing after the start and then returned in time to see the first finishing team. Under daughter April’s direction, the race is much better organized now and the teams certainly appreciate the many volunteers, timekeeping, results posting, finish photos, and porta-potties. The graph below is a plot of our average race times, in minutes per mile, over the course of the many years that we have raced around Lake Tahoe. I have raced every leg at Tahoe at least 3 times. The figure shows both my personal times for whatever leg I ran and the average team time for the entire 7 legs. The graph confirms what we aalready know – it’s not getting any easier with age to circle that Lake! In fact, we are slowing down by about 4 seconds per mile per year. In our early years, both my team and I breezed along at about 6 minutes a mile. Now, 31 years later, we are slogging it out in the neighborhood of 8 to 8.5 minutes a mile. Despite the fact that it’s tougher not only for our older bodies to circle the Lake, but also to find enough old bodies who are willing and able, we will continue to make the annual journey. I’m not sure why the Tahoe Relay continues to hold such an allure for our Club after all these years. It’s now more difficult for us old-timers to adjust to the thin air, to spend the whole day on the road aiding our team, to climb those hills, and to run all-out when you can’t see anyone in front or behind you. The allure is probably a combination of many things: the team camaraderie, the great volunteers and race atmosphere, the challenge of circling the Lake, the tradition, the weekend getaway, and the beautiful scenery. In any case, we’ll keep coming back as long as our legs and lungs hold out. Let us not forget as well that the original reason for the race was a tribute to Captain Robert DeCelle Junior who gave his life for his country in Vietnam. All of us in that 1979 race photo above were personally touched by that war. After all these years, we are still sending our brave young men off to fight in faraway lands. When we circle the Lake, let us be thankful that we are healthy, able and safe enough to do so. Thanks for keeping the tradition alive! 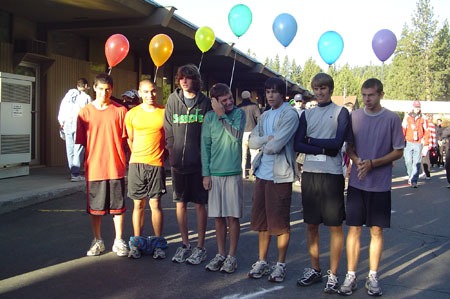 I was wearing an old 1990 Tahoe Relay t-shirt when my 15 year old son asked me about this race. After telling him my experiences running the 72 mile loop a couple of times, he asked if I would sign him and his friends to run this race. He recruited six of his school buddies and began training for the race a whole 3 weeks before. None of the boys had ever ran in altitude, so the first run was only about 3 miles when they realized, this may be harder than first thought. On the morning of the race, the boys were exited and nervous, this quickly faded when chatting with other teams and flirting with the girls. As true 15 year olds, they wanted maximum attention so they pinned balloons to their shirts, this strategy worked as they quickly became the “Balloon Boys” and “Balloon Heads”. My expectation for the team was to just finish the race, however, after completion of the 3rd leg, it was obvious that the boys competitive spirit kicked in. One of the boys had never ran more than 5 miles, but he didid great running his 10.5 miles! At the end of the day, to my surprise, the boys finished 12th overall! I am so proud of the boys, I never expected them to do so well. They all had fun, met lots of new people, the other teams were wonderful, the weather was perfect, and you guys did a wonderful job! I hope to be back with the “Balloon Boys” next year. THANK YOU!!!!!!!!! The Balloon Boys 2007 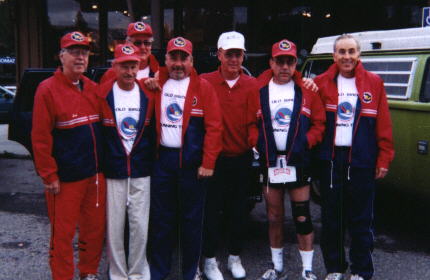 The “Old Birds Running Team” is a compilation of former Western Airline pilots. We came together under the leadership of Bob Farrell who along with the rest of the original team were based in San Francisco with Western. Running it seemed at the time was what everyone was doing to stay in shape. Bob came across a team race in Lake Tahoe in the early 1970s called the “Robert De Celle ll Memorial Tahoe Relay”, and he put the first Western Airline Pilot Team together. We would later be called the “Wally Birds” as that was the Western mascot who rode on the tail of our aircraft in TV adds saying “Western Airlines”,” the only way to fly”. Many of you will remember the free champagne. The team has stayed together and ran every year from that first race. We have changed members and cycled through a lot of pilots to keep the team going. Over the last twenty years we have developed a core group that returns every year to give battle to this changeling course. The aging process has changed our competitive ability and our name which is now the “Old Birds”. Most of use are getting around the lake, but just barely. We are now all retired old pilots with many worn out parts trying to keep it together. We return each year to share a life experience with each other by running, walking, or whatever we can do to get around the lake. We are no longer competitive, but we are there. So when you pass an “Old Bird” on the course, give us a little respect, we have been there a long time. “We know what it is like to be young and fast, and you will soon know what it is like to be old and slow”. We would like to add a special thanks to April Carter and the De Celle family. We keep in mind the reason that we run this race every year is in memory of Robert De Celle ll. As pilots we share a common bond, and that bond extends through our group to the De Celle family and holds us all together. You have through this event given us, “The Old Birds”, a life long association. Thank You: -Captain Gary Guilliat Ret. -Captain Bob Torbenson Ret. -Captain Roy Sordi Ret. -Captain Rick Gordon Ret. -Captain Tony Schoemehl Ret. -Captain Larry Miller Ret. -Captain Andy Owens Ret.